Safe Box “The Illusion of Security” 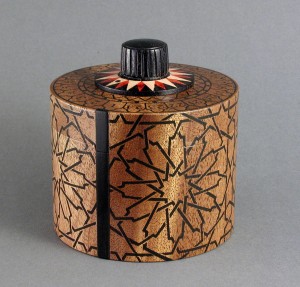 Safe Box “The Illusion of Security”

The idea for this box developed over time. I had completed several of my Cryptex Tantalus boxes and was considering what to make next. After attending several design rotations at the national woodturning symposium, I was thinking about how to make a locking box where all of the design elements held together. The idea of a vault or safe like structure, particularly a radial arrangement of locking bolts was in my mind. 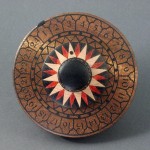 During this process, I found myself standing in the teller line at my local bank looking at the 150 year old walk-in vault. I’ve admired this vault and all of it’s mechanical workings in the past, but this time I had more time and more interest. The vault has two doors and they are both swung wide open during business hours. In this presentation, the vault designer chose to display a highly complex arrangement of gears, racks and large steel bars that hold the vault shut. All driven off of one gear in the center that connects to a handle on the front of the door. Walnut sized nuts out of bronze appear to hold the mechanism in place. Every single piece of metal is engraved with a fine detail. I started asking myself what was the designer thinking, does the complexity make it more secure?  Why would you put so much effort into embellishing the mechanism? Would it not have been cheaper and stronger to just weld or rivet it together?

And finally, why would one choose to expose so much of, let alone any details of the workings of a vault? This vault is open 8 hours a day and anyone can spend a good deal of  time looking at and contemplating the mechanism as I was now. Is it a trick or a tease to any potential bank robber? And then it hit me, the inside of this vault was made to be looked at, to be on display for the bank. It’s intent is to make you (or me) the customer feel safe and secure about keeping money in this bank. The majority of bank thefts attack the human side of security, an inside job, or done when the bank (and the vault) is open on payday.

The purpose of this vault is to make me feel secure, it is an illusion of security. 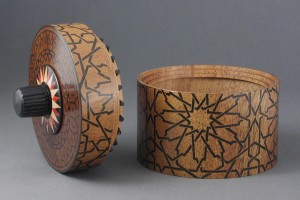 This concept resonated strongly with me, airport “security”, a job with steady income and health insurance, marriage, religious faith, a big house with a mortgage – all the various ways we surround ourselves with the illusion of security.

I no longer concerned myself with the actual security of my locking box, It can be smashed or sawed open in an instant, it too is an illusion.

The sides are detailed with a fine outline derived from an Arabic mosaic pattern, the lines broken to give the appearance of a woven mesh. The dial is from a memory I have of a post office box that my parents used when I was young and we lived in a small town. The face had two knobs and raised lines in the cast metal door. 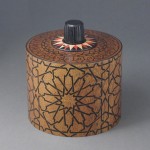 This box has a combination that must be demonstrated each time it is shown. You explain that it functions like a combination lock left-right-left, while turning the dial back and forth to the numbers of the combination, slowly so that the clicking sound feeds the illusion. When the combination is completed, lift the lid and show the underside, hand it to the person you are showing it to and let them turn the knob while looking at the top. Usually by this point I’m being asked questions about how the mechanism works or even “Where did you buy the mechanism?”.  I explain that it uses a set of eccentric cams or gears and that while not trivial, it is not as complicated as it appears. Turn the knob back to the final number close the box and spin the knob to lock it.

While some people choose not to consider the workings and just accept that it is a combination lock made from wood, others who spend time with it soon realize that it is simply a single position latch. It is still a rather clever mechanism to accomplish this. I prefer to let people figure it out, for me this makes the box a performance piece, somewhat like a magic trick. What I get out of it is how others react.

The first time I demonstrated this to another professional woodturner, I was practically shaking. Terrified that I would be called out on the spot for my intentional deception. I am not a good liar. I very quickly explained that it was a deception and showed how the box worked. To my surprise he was amazed by the box. He encouraged me NOT to explain it’s workings when demonstrating it. Later that evening I demonstrated it many times to the attendees at a wood turning meeting. My progression from a guilty deceiver to a master illusionist culminated with demonstrating the “Safe Box” to a room of a hundred people or more, working it in front of a camera that projected for all to see.

I hope you enjoy “Safe Box” 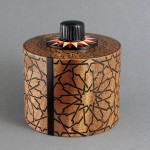 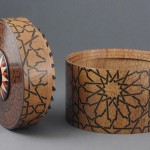 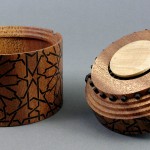