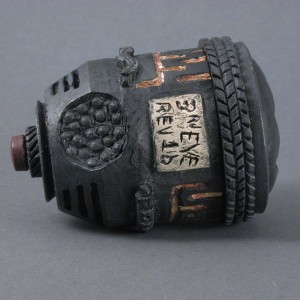 I have always collected small bits of archaic technology.  About 20 years ago I acquired a small cube corner retroreflector. Having been interested in optics in high school (I ground my own telescope mirror), I was familiar with the principle of the corner retroreflector but had never had the chance to play with one. To my surprise, I discovered that when you look into a cube corner retroflector you always see your own eye (of course!). I realized that this was an experience that was alien to most people (as it was for me the first time) and a bit of a magic trick or wizardry, hence it was added to my collection.

I had been thinking about incorporating the retroreflector in a work for some time. This past spring, I attended a week long class with Bonnie Klein and Jacques Vesery at Arrowmont – a perfect opportunity to finally make the piece.

The design (if you can call it design) of the 3rd Eye evolved during it’s creation. The front face of the eye is carved to look like a six-leaf iris, modeled from a 20(!) leaf  iris that I acquired from an old bellows camera. The hollow inside was made deep enough hold the retroreflector with a little extra space. I decided that the iris top would have knurling on it to allow the device to be opened. This much was determined from the outset.

I kept the device in my pocket most of the week. I found small magnetized and polished hematite at one of the tacky shops on the strip in Gatlinburg, three of them fit together inside and stuck to the metal case of the retroreflector. I liked the way they added to the already unusual weight (because of the glass). I had the humorous idea that the hematite stones were “memory stones” that stored whatever it was that 3rd eye was observing. I started taking myself seriously and describing it as an earnest child would, to virtually anyone who would listen.  At this point it took on a life of its own. 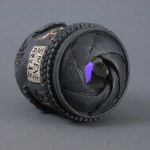 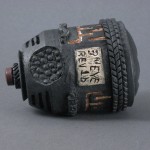 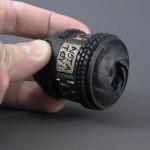 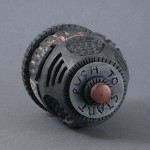 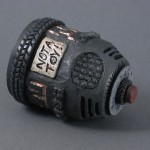 Obsessing about the device

The start button on the back has that dull, much used red Bakelite color to it. As a kid, I would tear old equipment apart and save whatever I deemed might be useful. This button is surely from that collection. It’s worn out. If it was an actual button it would make an unsatisfying click when pushed and you wouldn’t be sure it actually worked.

The heat vents are styled from my memories of the vents on the backs of VW vans and bugs. We had a camper that manged to make trips all over the Northeast. I also attempted to rebuild a bug. I got as far as pulling the seats out and stripping the interior.

The writing looks child like. This was not intentional, my actual handwriting is quite bad. That coupled with attempting to write with a burning tool resulted in what you see.  I was rather worked up about trying to be neat and quite disappointed (at least initially) with the results. It should have been intentional.

The revision (1.b) is a reversal of “Saturn B1”, an early booster in the Apollo project, a fascination of which certainly help lead me to a professional career as a software engineer.

I’d like to make some comments about the structure and meaning of this piece.

When you look into the cube corner, you see the 3 lines that intersect, the edges of the cube. In between these lines are the reflections on each face of the opposing cube edge. The result is the perfect division of a circle into six triangles. I’ve intentionally carried and referred to this 3/6 symmetry in the details on the rest of the piece.  There are 6 leaves on the iris, 3 vents with 3 finger holds between them, 3 sets of external component details above each of the 3 vents, but I have broken this with the 2 text panels. Whether or not you are aware of it, this has an impact on how you perceive the piece when you pick it up and handle it.

Finally, an aspect that I appreciate in the work of others is an intense layering of intent and meaning. Once this piece found it’s direction, it was “easy” for me to just pile on references to my past. It astounds me looking at it now, how much additional layering and meaning is there. It literally contains something I collected at a tech job 20 years ago, at a company that is long gone. I decided that the stones were memory stones and then proceeded to unconsciously fill this piece with details from my memories.

“In the Indian tradition, it is referred to as the gyananakashu, the eye of knowledge, which is the seat of the ‘teacher inside'”

I don’t think of this piece as being that serious, but when you put as much as you possibly can into a work, other people will pick up on it.